Though not the largest in terms of population or area, Manhattan is the most well known and the typical image people conjure when envisioning the streets of New York City. This famous island is home to an overwhelming majority of the economic output of the city and by far the most densely populated. Dubbed the financial, cultural, and media capital of the world, there is an almost unlimited number of activities, events, shows, attractions, and places for you to go, see, and do in the city. One of the most diverse cities in the world, where a collection of people from all backgrounds, nations, and religions intersect, the cuisine echoes the diversity with dishes from all over the globe available daily. The highest rated restaurants in the world can be found here as well as cheap local eats that are equally delicious in their own way.

One of the most desirable living locations in the city, especially among younger professionals. Chelsea is located just north of Greenwich Village on Manhattan's west side roughly between 14th and 34th Streets. One of the areas most popular attractions is the repurposed High Line, which used to be an elevated railroad track that was transformed into a beautiful community walking path with great views of the neighborhood and city skyline. Also popular is Chelsea Market, which is home to upscale shopping and numerous casual dining options. Across the community, there are many swanky restaurants and bars popular among the residents of Chelsea.

Historic Harlem is known as the center of African-American culture in the city. Vintage jazz clubs and soul food restaurants make Harlem a popular neighborhood for tourists and New Yorkers alike. Perhaps the most iconic attraction in Harlem is the famed Apollo Theater music hall. Harlem is also home to a vibrant nightlife scene with many trendy bars, restaurants, and clubs.

New York Style Pizza is characterized by its thin crust and wide slices. Crispy crust is a staple of the dish, and often the slices are big enough to be folded in half. Simple ingredients like tomato sauce and shredded mozzarella cheese are all it takes to make a delicious New York Style Pizza. The New York Pizza grew out of the Italian Neapolitan style pizza that immigrants to New York City brought with them to America. This style of Pizza is popular in the Northeast and across the country as well. Try it in Manhattan with delivery from Joe's Pizza on Broadway or Angelo's Pizza.

Originally from Sicily, the Cannoli is a traditional Italian dessert that was brought to America by Italian immigrants during the 19th century. The dish consists of a tube-shaped fried dough pastry that is sometimes doused in chocolate and then filled with cream before eating. This delicious dessert is the perfect sweet way to end any Italian meal. Try it today with delivery in Manhattan from restaurants like Silver Star Restaurant.

The Gyro is a Greek dish popularized by Greek immigrants, many of whom settled in New York City and specifically Queens. Made from cooking meat on a vertical rotisserie and then shaving off thin pieces before wrapping or stuffing them in bread, often pita, with additional toppings of your choice. Common toppings include tomato, onion, and tzatziki sauce. The meat is often lamb or some combination with chicken. Get it delivered in Manhattan today from Fournos Theophilos. 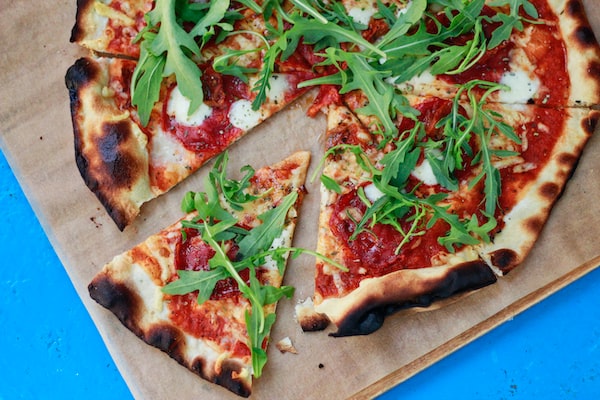 Pizza is by far the most popular food delivery item in the country. Unfortunately, it has become more and more expensive these days to get great pizza delivered to your house. Luckily for you, FoodBoss went out and found who delivers the cheapest pizza in Dallas so you...