Portillo's Chicago is a local legend that still deserves an in-depth review. When it started in 1963, owner Dick Portillo likely had little idea of what he was starting. Chicago food was never the same after that. As just a lone hot dog man looking to make some great dogs, Portillo's has exploded to and has a reputation for great, quick Italian food and one of the best Chicago hot dogs you can get out there.

I stopped in at the River North location recently, because that happened to be the Portillo’s near me (they have locations all over Chicagoland). If you go on a weekend, expect the place to be busy since tourists and local Chicagoans alike love the place, so when I went last Saturday I made sure I was in no rush to get my food.

You might think Portillo’s is just a hot dog place if you’ve never been, but locals know Portillo’s is much more than that. As I looked over the menu, I found many options that intrigued my mind and my stomach (per usual).

Obviously, there was the most basic choice of a plain dog with just ketchup and mustard, but Portillo’s is also known for having some of the best Italian beef in Chicago.

For that reason, I went with the combo beef and char-grilled sausage meal that looked particularly delicious. This meal is a combination of Italian beef and sausage pulled together and is combined on a French roll to create a very delicious taste.

To get into the spirit of things, I order two jumbo dogs with mustard, relish, celery salt, onions, tomatoes, pickles, and peppers. Price is always something to consider at a restaurant, and I feel this is a good point to drop the bomb about Portillo's menu prices: they are incredible. My two jumbo hot dogs cost just $3.35 each. These are real local “hot dog stand” costs, and each dog is more than worth it.

While I waited for my dogs to show up, I soaked in the atmosphere of Portillo's. Like many downtown staples, it featured a variety of decorations that make it stand out. For example, there were many photos from when the place originally opened up. These were fun to look at, as was the gallery of famous people who have visited the restaurant.

I would warn the picky eater, though, that Portillo's is not the place to come if you like to eat alone or without a lot of people around. So anticipate sitting closer than you'd like to a stranger. That's perhaps the biggest downside of Portillo's, though the more sociable person will love spending time meeting new people.

Anyone searching for a “Portillo's near me,” knows how well the dogs hold up, but for the less experienced consumer let me fill you in. The atmosphere is a fun consideration, of course, but the quality of the food is all that matters. Do Portillo's hot dogs live up to the legendary status that has been placed on them?

First of all, let's talk about the presentation. When my dogs were brought out to me, I was staggered by their size. The jumbo dogs are truly huge, and they were piled on with toppings.

Picking up the first dog, I'll admit, I had a hard time imagining how I was going to take a bit of something so big. Chicago style hot dogs are definitely unique.

However, I managed, and here's what I thought of each ingredient, in detail. The buns were warm, soft, and easy to chew. They had none of the rock hard texture you find at so many convenient lower price restaurants. Apparently, the buns are kept warm throughout the day to provide maximum softness.

The mustard and relish offered a sweet flavor enhancement texture, without overpowering the meat taste. At least too much: I do have to say that the toppings here were a little thick for my liking, but not even close to the point that I couldn't enjoy the dog. Frankly, I'd only have removed maybe only a little bit to get my perfect level.

As for the vegetables, they were delicious. Each felt as if they had just been picked, cleaned, chopped, and served just that morning. Like the mustard and the relish, they were layered on pretty thickly. However, I felt like they didn't quite overpower the taste of the meat quite like the relish.

I do feel, though, that I erred in buying two dogs instead of one. After finishing the first, I was quite stuffed. Attacking the second one proved to be too difficult of a task for me to finish on my own.

The milkshake was pretty good, mixed to a fairly thick texture, and more than worth the price. I'd compare it favorably to a smoothie found at a typical ice cream shop. While not the best I've ever tasted, it was better than average.

The garlic bread was also quite good, though not quite as good as the dogs. For one thing, it's a pretty simple order and the portions are relatively small. That's understandable, given the nature of Portillo's.

It's typically a place people stop by alone or for a quick bite. A large order of garlic bread for one person is probably excessive, particularly for the price.

One thing I enjoyed about their garlic bread was that they didn't burn it the way you see in other restaurants. It was crisp without having that rock-hard texture you often get when places aren't careful. It was firm but easy to chew, and it had a rich flavor that went particularly well with my jumbo dogs.

I have to say that Portillo's more than lived up to what I expected from it. The hot dogs were tasty, the prices were low, the atmosphere was fun, and everyone was respectful. There's just a feeling of fun and joy running through the place, something that is hard to put down into words without experiencing it yourself.

Consider this a local legend that is well worth your time. Even if you can’t make it to the actual location, try out Portillo’s delivery. You’ll be just as pleased. 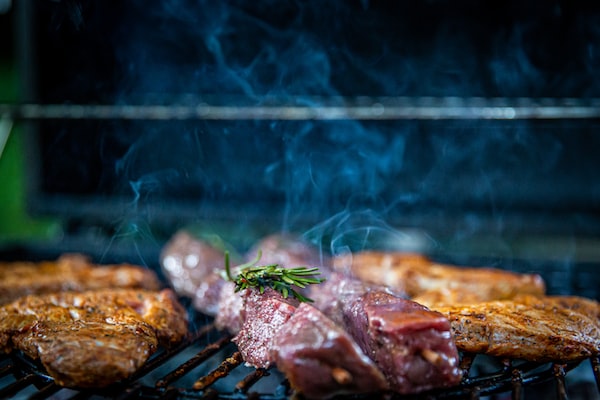 Dickey’s BBQ Pit is Equivalent to a Meat Lover’s Heaven. And the best part is that Dickey’s Barbecue Pit delivery is available.

Welcome to FoodBoss! FoodBoss is the world’s only food delivery aggregator saving you money and time on all your food delivery orders from your favorite restaurants across the country.